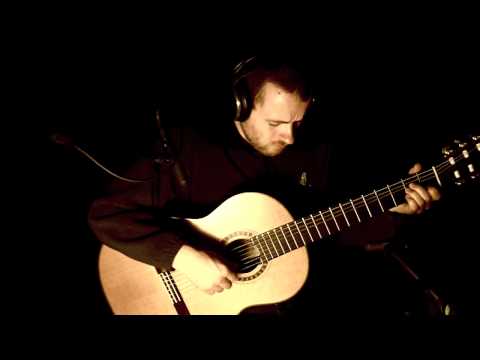 This was probably the hardest song I have ever trans-cribed. It took hours and hours. Mostly because it was originally recorded and composed completely in free time.

I had to make a lot of decisions in order to put it on paper as accurately as possible. As I generally do with most of my music publications I did not include left or right hand fingerings, or expression marks such as legatos and such. I do this because it is extremely tedious work, but more importantly because I don’t want people to play carbon copies of my music. I believe music should be interpreted and imbued with the style of the artist who plays it.  Here is a sample of the sheet music.

I tried to be as accurate as possible with the notation and the tabs but some notes may have been omitted and altered from the original youtube video. This had to be done in order to “square” the music in 4/4 time on the printed staff.

Leave questions about this song below and I will do my best to get back to you.

Liked it? Take a second to support John H. Clarke on Patreon!

This site uses Akismet to reduce spam. Learn how your comment data is processed.